As a social animal, man has to live with fellow human beings for sustenance, companionship and growth. Unfortunately man, unlike other animals that also live in groups or herds or prides has the compulsive unconscious urge to seek acceptance /approval of those around for every deed, action and indulgence. Even more unfortunately, man has also perfected the art of being a born critic and we easily find fault with people, happening and things around. When we analyze the behavior of the critic in us, we would realize that we have subconsciously become negative in our perception and thinking, our negativity has clouded our ability to be more discerning and appreciative and we are easily reconciled to failure, plead haplessness and find excuses to rationalize our personal lack of success.

Let us examine how each of these behaviors’ are self imposed and self limiting.

By being negative in our perception and thinking we let in self doubt creep in; we train ourselves to see the imperfections and we gravitate towards the bare minimum standards of acceptance so that we don’t seem to be failures. The fear of public speaking that an overwhelming majority of people suffer from is a classic case of our negative perception and thinking preoccupies us and restrains us from overcoming our fears.

Negativity clouding our ability to discern and be appreciative makes us succumb to the temptation of fault finding, self depreciation and failure prone. Even if someone else gives us a compliment we tend to play it down or deflect attention to something that takes the shine of the compliment. Similarly when opportunity presents itself we hesitate to take the initiative succumbing to our insecurities. We also naturally end up focusing on those failures that we may have encountered and completely ignore the numerous success that we have been privileged to embrace. Remember how our parents automatically scanned out report card to find the red lines that signified failure or quickly picked up on the lowest marks completing ignoring the numerous high scores we may have got.

By reconciling to failure, pleading haplessness and finding excuses, we do not give ourselves the opportunity to leverage our inherent strengths. Success is actually a culmination of effort most of it repetitive efforts despite failures. Many of us though give up at the first hurdle instead of persisting with hope and faith. We do not even make the effort of trying pleading haplessness or find excuses to wriggle out of a tough call. The overwhelming emotion that envelopes us is fear of failure and ridicule by others is actually the critic in us constantly whispering in our mind don’t embarrass yourself in front of others. How many of us who do poorly in our tasks began by saying ‘I don’t know what to do’ and later go on to say ‘ I am not capable of doing it’ and finally accepted failure by saying ‘ I just wasn’t cut out for it’. Notice that each of those statements are actually directed at others who maybe onlookers, co-participants or possibly evaluators and the statements are crude efforts to avoid any criticism.

The only way to tackle our fears is to confront it by being a participant and not a distanced critic. This is best done by visualizing success, anticipating and preparing for potential pitfalls and wholeheartedly embracing and enjoying the process. The real success would be in conquering one’s fears by setting yourself free of criticism, fear or failure.

From the following situations, rate the situation that would embarrass you the most to the least. Reflect on why each situation gets the rating you have assigned.

PrevPreviousAre you guilty of this?
NextI choose…Next 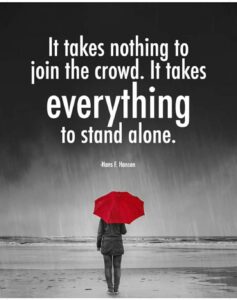