It is rather ironic that today’s post offers hope; for a despondent nation is still trying to pick themselves up after their semi-final loss to Australia today, at the 2015 Cricket World cup. In fact the raging debate especially on TV channels is between those who believe we have been shattered and those who say that the defeat is a mere blip albeit a devastating one. So to begin with let us accept the fact that after a flawless undefeated run upto the semi-finals, we did get a nasty crack when playing a better team. Yet, while the margin of defeat, the manner of loss, the poor bowling, batting on display as well as the captaincy will be the subject of much debate the fact is that cricket will continue to be our most loved sport. More importantly, remember it was the same team that were totally outplayed in the Australian series that turned themselves around to have an unblemished run till the semi-finals; clearly proving that we can still mend the cracks and also crack the whip when we want to.

Each one of us would have at various times experienced failure. Most failures largely our own fault where we were tardy, disorganized or simply not prepared to succeed. However there could be times when failure hurt us deeply because it was unexpected, we felt humiliated or because we had prepared in all earnest to succeed. In almost all cases failure did not end our life, nor threatened our career or terminate our future. This clearly underscores an important characteristic of failure, that with very few exceptions, failure can only temporarily impact us. Overcoming failure is a matter of 4 simple steps

Believing in yourself – We throw in the towel when we stop believing that we are capable of achieving what we set out to do. This is primarily because we focus on our limitations and weakness rather than on our strengths and our passion. Each one of us can grow in our chosen field of endeavor, provided we nourish it with the right amount of effort, intellect and discipline. When we do get the results the first time, see it as an opportunity to prepare better and succeed.

Letting time be the healer – When we fail, we must avoid cracking up and seeing lack of success as an end to our aspirations. Do mull over the reasons but do not brood over it forever. Let by gones be by gones but never forget the lesson.

Fresh initiative and diligent effort – Time also gives us an opportunity to go back to the drawing board, come up with fresh strategies and relaunch a fresh attempt with a brighter chance of success. Leveraging our strengths, adding new arsenal to overcome our limitations and honing up skills as also find other means to neutralize our weakness are the key to succeeding.

Not giving up and also knowing when to give up. – Perhaps this is rather difficult to comprehend for there are two diametrically opposite suggestions. Try till you succeed is an old adage and frankly an excellent piece of advice to follow. So what if a crack appears, one can still stick the pieces together and get things functional. However what happens when the cracks are too many and too fragmented. Perhaps the only way out is to replace. Essentially it means that the outer frame is still sturdy, it has tremendous utility but it may require a fresh coat or it may need to be fixed with fresh glue. In investment parlance knowing when to give up is called ‘cutting one’s losses’.

You may lose a thousand battles but you can still win the war ! Don’t give up- don’t give in; just give it your best shot ! even it means having to take a decision to cut your losses. 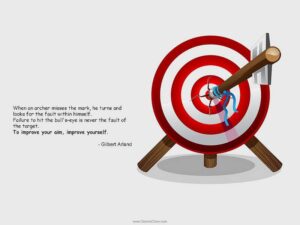 Lessons from an archer 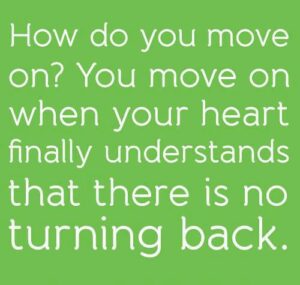 How to move on in life 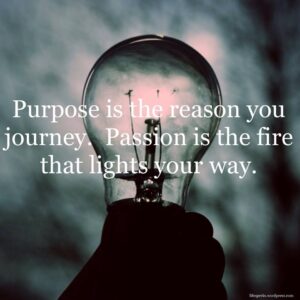 Importance of the purpose and passion in life